STREAM THE MAGIC OF THE PARAMOUNT

Scroll down to find:

The Paramount Theater’s mission is to educate, enchant, enrich, and enlighten our Charlottesville community. We hope the content below will bring The Paramount’s magic to your home!

Please note that one ticket is required per stream. If you miss your time slot for which you purchased a ticket, you will need to purchase again (just like going to the movies, the streams are date and time-specific). IMPORTANT: Tickets are not-transferrable.

Captured live from the London stage and directed by the original author of the show, Mark Bramble, 42nd Street is one of Broadway’s most classic and beloved tales. This eye-watering extravaganza is full of crowd-pleasing tap dances, popular musical theatre standards including “Lullaby of Broadway”, “We’re in the Money”, “42nd Street” and more, plus show-stopping ensemble production numbers.

The beloved musical, set in 1933, tells the story of Peggy Sawyer, a talented young performer with stars in her eyes who gets her big break on Broadway. Peggy arrives to New York City from her hometown of Allentown, Pennsylvania and her talent catches the eye of legendary Broadway director Julian Marsh. She gets a spot in the chorus of the musical-within-the-musical, Pretty Lady.

Dorothy Brock, the classic Broadway diva and star of the show, takes a dislike to the new girl. When Dorothy is injured, Pretty Lady looks like it will have to close, unless a new girl talented enough to lead the show can be found — someone like Peggy Sawyer!

★★★★★ “The mother of all show-biz musicals” — Daily Telegraph

About Endlessness is a reflection on human life in all its beauty and cruelty, its splendor and banality. We wander, dreamlike, gently guided by our Scheherazade-esque narrator. Inconsequential moments take on the same significance as historical events: a couple floats over a war-torn Cologne; on the way to a birthday party, a father stops to tie his daughter’s shoelaces in the pouring rain; teenage girls dance outside a cafe; a defeated army marches to a prisoner-of-war camp. Simultaneously an ode and a lament, About Endlessness presents a kaleidoscope of all that is eternally human, an infinite story of the vulnerability of existence.

In addition to the feature, there will be a pre-recorded discussion between filmmaker Roy Andersson and Palme d’Or winning/Oscar-nominated filmmaker Ruben Östlund (THE SQUARE, FORCE MAJEURE), exclusive to virtual cinema.

What if we are living in a simulation, and the world as we know it is not real? To tackle this mind-bending idea, acclaimed filmmaker Rodney Ascher (ROOM 237, THE NIGHTMARE) uses a noted speech from Philip K. Dick to dive down the rabbit hole of science, philosophy, and conspiracy theory. Leaving no stone unturned in exploring the unprovable, the film uses contemporary cultural touchstones like THE MATRIX, interviews with real people shrouded in digital avatars, and a wide array of voices, expert and amateur alike. If simulation theory is not science fiction but fact, and life is a video game being played by some unknowable entity, then who are we, really? A GLITCH IN THE MATRIX attempts to find out.

Please stick around after the film for an exclusive discussion between director Rodney Ascher and critic Joshua Rothkopf, digging deep into simulation theory, filmmaking, and everything in between.

Through the eyes of three stray dogs wandering the streets of Istanbul, STRAY explores what it means to live as a being without status or security. As they search for food and shelter, Zeytin, Nazar, and Kartal embark on inconspicuous journeys through Turkish society that allow us an unvarnished portrait of human life — and their own canine culture. Zeytin, fiercely independent, embarks on solitary adventures through the city at night; Nazar, nurturing and protective, easily befriends the humans around her; while Kartal, a shy puppy living on the outskirts of a construction site, finds refuge with the security guards who care for her. The disparate lives of Zeytin, Nazar, and Kartal intersect when they each form intimate bonds with a group of young Syrians who share the streets with them. Whether they lead us into bustling streets or decrepit ruins, the gaze of these strays act as windows into the overlooked corners of society: women in loveless marriages, protesters without arms, refugees without sanctuary. The film is a critical observation of human civilization through the unfamiliar gaze of dogs and a sensory voyage into new ways of seeing.

In addition to the feature, there will be a pre-recorded discussion between the film’s director Elizabeth Lo and Academy Award-nominated filmmaker Rachel Grady, exclusive to virtual cinema.

Two retired women, Nina and Madeleine, have been secretly in love for decades. Everybody, including Madeleine’s family, thinks they are simply neighbors, sharing the top floor of their building. They come and go between their two apartments, enjoying the affection and pleasures of daily life together, until an unforeseen event turns their relationship upside down and leads Madeleine’s daughter to gradually unravel the truth about them. 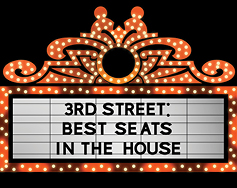 With tremendous gratitude to Lorenzo Dickerson of Maupintown Media, we are thrilled to bring a streaming option to you of the documentary that premiered at The Paramount in August 2019.

3rd Street: Best Seats in the House tells the stories of African-American patrons of The Paramount Theater and their personal experience of the formerly segregated 3rd Street Entrance and Box Office prior to the Civil Rights Act of 1964. A light is shined on the previously untold stories and experiences of local Charlottesville residents, who were made to use the segregated Entrance and Box Office in accordance with the law. The film will share a personal reflection on topics such as structural racism, the implementation and execution of Jim Crow Laws, and racial segregation through the experiences of Charlottesville community members.

In advance of the film’s premiere, a unique exhibition was unveiled on the Theater’s 3rd Street exterior wall. The temporary installation, created in partnership with Maupintown Media and the City’s Unity Days, featured large-scale photographs, silhouettes of patrons, and quotes from the movie’s interviewees. Through the exhibition and film, members of our community share their personal memories and experiences of attending movies at The Paramount during the Jim Crow era. Their first-person accounts will give voice to the not so distant past.

Complimentary Streaming from The Paramount

Live From The Paramount – Barcelona, Spain!

On Sunday, February 21st, around 200 participants signed in to travel through Barcelona with Mark Hahn, President of Harvest Moon Catering; Tomas Rahal, former chef at Mas Tapas, and current owner of Quality Pie; David Gies, Professor of Spanish at the University of Virginia; and Israel Klich, our guitarist for the evening, for the inaugural Live From The Paramount event, Barcelona, Spain!

We had so much fun exploring Spain for this segment! Have an idea for our next digital excursion? Let us know your suggestions for the next “Live From The Paramount” event by emailing us at info@theparamount.net.

How Charlottesville Got Its Theater Back

Round up the littles – it’s storytime! Written by Jane Goodman and illustrated by Keith Damiani, the 2002 children’s story How Charlottesville Got Its Theater Back is a picture book about Murphy the Mouse and the town of Charlottesville’s efforts to save the historic Paramount Theater.

CLICK HERE To purchase a physical copy of the book for $25. Or, when you sign your young one up for Paramount Kids Club for $35, you’ll receive the book along with even more Paramount swag! Thank you for your continued support during these challenging times!

You can sign up for the Kids Club HERE.

A Brief History of The Paramount

How Charlottesville Got Its Theater Back does not end here. Listen to a 4 minute video to learn more about The Paramount’s stage reopening in 2004.

Follow along with our Director of Operations & Programming, Matthew Simon, as he walks you through how to make these delicious cocktails from home in this fun mini-series, Mixology with Matthew. Cheers everyone!

STREAM THE MET FROM HOME!

The Met will offer a nightly series of free encore-presentation web streams that will bring opera to audiences while the house is dark. Tune in to watch at 7:30PM ET! The broadcasts will remain available via the homepage of metopera.org for 23 hours. The homepage link will open the performance on the Met Opera on Demand streaming service. The performance will also be viewable on all Met Opera on Demand apps.

During this time of social distancing, many artists have taken to YouTube, Instagram, or even Facebook to live stream their musical talents to fans across the world! Below are some past Paramount performers who did just that!

Hours: Wednesday & Friday 10AM to 2PM or One Hour Before Each Show!

As a nonprofit theater, The Paramount relies on community philanthropic support in addition to revenue from performances. With the loss of over $700,000 in revenue due to the cancellation or postponement of 100 events in the wake of the COVID-19 public health crisis, this pandemic has and will continue to take its toll on Charlottesville’s beloved historic Theater. Since 1931, The Paramount has served as an iconic landmark central to our historic downtown and through its mission to educate, enchant, enrich, and enlighten through the arts, the Theater serves as an important economic driver for our region.