The historic Paramount Theater of Charlottesville is thrilled to be named the 2017 Outstanding Historic Theatre by the League of Historic American Theatres! 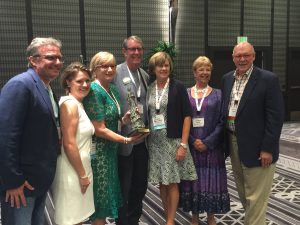 “We could not be more honored to receive this very distinguished award from The League of Historic American Theatres. Our pride for our Theater being recognized with this honor shines through every seat in the auditorium, every smile on a patron’s face, and every glimmer of excitement in a child’s eye when they see an event on stage. None of this would be possible without the foresight of those who saved and restored our beautiful Theater. To be recognized nationally as The Outstanding Historic Theatre for 2017 by such a prestigious organization, is an honor we share with our community and we plan to celebrate this honor with you all this season!” -Chris Eure, Executive Director

The Outstanding Historic Theatre Award recognizes a theater that demonstrates excellence through its community impact, quality of program and services, and quality of the restoration or rehabilitation of its historic structure. Former winners of this prestigious award include the distinguished Fabulous Fox in Atlanta, the New York City Center, the Mayo Performing Arts Center in Morristown, New Jersey, and Playhouse Square in Cleveland, Ohio to name a few. CLICK HERE to view a full list of Outstanding Historic Theatre Award winners.

“Congratulations to The Paramount! The Paramount was named the 2017 Outstanding Historic Theatre by the League of Historic American Theatres in recognition of its excellent programs and services, the quality of the restoration of its historic structure, and its outstanding community service. The Senior Center benefits from the Paramount’s generosity through the Mary Reese Community Access Fund.” – Senior Center