We were thrilled to talk with Christal Brown, creator and choreographer of The Opulence of Integrity, coming live to The Paramount’s stage on Thursday, January 18. Take a behind-the-scenes look at the production, which is a theatrical, multimedia ensemble work influenced by the public life and inner searching of boxing’s outspoken superstar, Muhammad Ali.  Inspired by Ali’s career as a boxer and life as a social activist, public martyr, and human being, Brown deploys her eclectic movement vernacular that includes elements of boxing, hip-hop, martial arts, modern dance, and theater to illuminate the turmoil of a life infused by divinity, yet misinterpreted by humanity.

What inspired you to fuse Muhammad Ali’s story with the medium of dance?

I was originally introduced to the idea of creating an artistic presentation of Ali’s life by Fred Ho, an iconic jazz musician. Ho was a huge fan of Ali and was drawing strength from Ali’s legacy to fight his own battle against cancer. Ho approached me and asked me to choreograph the last piece of music he wrote before his passing called “The Sweet Science Suite,” an homage to Ali. Ho envisioned the piece as a dance, music, and martial arts collaboration. Having seen my work in 2004, Ho remembered my background as an eclectic mover. We collaborated on the early iteration of the project that premiered at The Guggenheim’s Works & Process series in 2012. After that collaboration, Ho and I went on to pursue the work from different vantage points. 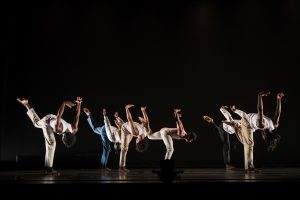 During the research phase of creating the movement language for “The Sweet Science Suite,” I became enamored with the different facets of Ali’s life: his public persona, his humble beginnings, his roles as husband and father, his commitment to his faith, his martyrdom, his masculinity, his activism, and most of all, his humanity. I began to see a complex and beautiful man who reminded me of my father, brother, uncle, and son. I began to see that Ali’s life was a life striving for freedom. He lived out his purpose and passion in front of the world. When those two things aligned, he was a hero, but when they didn’t, he was simply negro.

I am the daughter of a man who lost both his legs in Vietnam because he couldn’t say no. A man whose dreams of playing football and his identity as an athlete changed because of his lack of power. A man who thought going to war was the only way to do better by his family; subsequently his children never knew the man who made that choice, only the man who lived out the consequences.

What does the title of the show, “The Opulence of Integrity,” mean to you?

For me Ali is not one man, he is the archetype of every man and woman who dares to live out their greatness and endure the riches, ridicule, and regret that come along with being human. This is how the title of The Opulence of Integrity came to be. I was looking for a title, a statement, that gave context to the grandiose process of living a life of authenticity and truth. A life that requires one to be divinely inspired to meet every challenge with perseverance, courage, hope, and honesty.

Who can learn from The Opulence of Integrity, and why is Ali’s life and legacy so important to young people today?

Everyone can learn from The Opulence of Integrity. It is built to speak to the masses, not the elite. The work incorporates spoken text from Ali’s life, movements from various dance and martial arts, a historical sound score of the time in which Ali lived, and visual images of The Champ and his contemporaries in their prime. 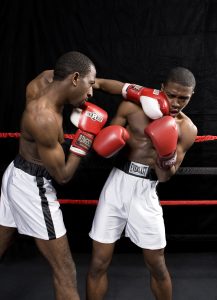 What is your favorite element of The Opulence of Integrity?

My favorite element of the performance is the journey the dancers take. In each performance I marvel at their willingness to give themselves over to this work in a way that transforms them along with the audience. Watching them take on the physical and mental challenge of being present within the arc of this work for over 55 minutes is a remarkable task that leaves me grateful and humble at the end of each performance.

You use a musical score by a Zimbabwean/American composer. How did you first come across his work, and what made you decide to use it in the show?

Farai Malianga and I are long time collaborators. When Fred and I disbanded and I began to open up the parameters of the work to expose the heart of Ali, I knew I needed a composer who understood struggle, the black male experience in America, and most of all what it means to aspire to become yourself without knowing who that is. Farai is a wanderer whose creativity thrives in process; where most of us find too uncomfortable to dwell. Farai’s ability to create soundscapes out of emotional intelligence is rare. We began collaborating in 2005 and I admire his work and our ability to create meaning together.

How is The Opulence of Integrity different from other dance, theater, or musical acts we may have seen?

I believe The Opulence of Integrity is different than other dance, theater, or musical acts you may have seen in that it blends the historical with the personal. Young people may leave the theater with new found knowledge of Ali, older viewers may become nostalgic, but it is our hope that every viewer will be inspired to perform an opulent act of integrity in their own lives.

CLICK HERE to learn more about The Opulence of Integrity and purchase your tickets today!