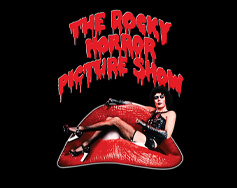 In this cult classic, sweethearts Brad (Barry Bostwick) and Janet (Susan Sarandon), stuck with a flat tire during a storm, discover the eerie mansion of Dr. Frank-N-Furter (Tim Curry), a cross-dressing scientist. As their innocence is lost, Brad and Janet meet a houseful of wild characters, including a rocking biker (Meat Loaf) and a creepy butler (Richard O’Brien). Through elaborate dances and rock songs, Frank-N-Furter unveils his latest creation: a muscular man named “Rocky.”

Dress in your favorite Rocky Horror get-up for our annual costume contest!

There will also be a live shadowcast for this year’s screening! Come see the actors on film come to life with Voyeuristic Intention as they perform while the movie plays on central Virginia’s biggest screen. Voyeuristic Intention, the first and only Rocky Horror Picture Show Club at UVA, is welcome to any student with an appreciation for the cult classic film. Each year they put on two shadowcast productions of the movie. The club prides themselves on inclusivity and freedom of expression, offering every student wanting to join a role without any audition. Get out your fishnets and join the group this November at The Paramount in a celebration of the wildness that is The Rocky Horror Picture Show!

Here is a list of Frequently Asked Questions (“FAQs”) about the Paramount Theater’s screening of The Rocky Horror Picture Show. Our goal is to provide a safe, enjoyable, and authentic “Rocky Horror experience,” without damage to person, property, or the historic Paramount Theater. Your cooperation is greatly appreciated.

1. Is there other entertainment that night?
We will be hosting a costume contest for all audience members. If you would like to enter the contest you will need to be registered by 9:00pm inside the theater.

3. Can I use props?
Yes, The Paramount will sell a limited amount of “prop kits.” You may bring your own as well but there are some rules and restrictions.

4. Well, what are those rules and restrictions?
Yes. Please note the following:

• The Paramount Theater reserves the right to determine what is allowed into the venue.
• All persons and property are subject to search upon entry.
• Anything that is not allowed will be confiscated.
• Foodstuffs are explicitly not allowed. They create a slip hazard, are hard to clean, and will spoil and attract rodents and vermin. This includes, but is not limited to Rocky Horror props like rice, toast, hot dogs, and prunes.
• The use of lighters and matches is prohibited. They’re obviously a fire hazard.
• Do not throw anything at the screen. It’s expensive and we might prosecute if damaged.
• Do not throw anything at anyone else. They might prosecute if damaged.
• Violators will be subject to ejection without warning.

Here is a somewhat comprehensive list of what is and is not allowed, along with suggestions for their use during the movie:

Allowed? Yes. Use: During the song “Science Fiction Double Feature,” pop the balloon when the movie When Worlds Collide is mentioned.

Allowed? NO! Why? It is very difficult to clean, it makes the floor slippery, and can attract rodents and vermin.

Allowed? NO. Why? It is very difficult to clean, it makes the floor slippery, and it’s known as the herpes of art supplies.

Allowed? Yes. Use: during “Dammit Janet.”

Allowed? Yes. HOWEVER, only water guns the size of your palm will be permitted into the theater. Use: during the song “There’s a Light (Over at the Frankenstein Place),” after they get out of the car, and are walking in the rain. Don’t squirt directly at any performers or audience members!

Allowed? No. Why? Because.

Allowed? Yes. Use: During Frank’s speech at the tank when he puts on the gloves, stretches, and snaps them.

Allowed? Yes. Use: During the Lab scene, when the Transylvanian Guests use their noisemakers.

Allowed? Yes. Use: When Dr. Scott makes his entrance and Brad exclaims, “Great Scott!” Wait for the line, and don’t throw it until Dr. Scott crashes through the wall.

Allowed? Yes. Use: When it starts raining. Duh.

Allowed? No! We know it’s a seminal Rocky Horror prop, but it is very difficult to clean, can make the floor slippery, and even crumbs will attract vermin and rodents.

Allowed? Yes. Use: When Frank pulls the table cloth off the dinner table.

Allowed? Yes. Use: During the song “Planet Schmanet,” after dinner, when Frank chases Janet and asks the musical question, “Did you hear a bell ring?” Your keys work too.

Allowed? Yes. Use: During Columbia’s speech, when she says to Frank, “you’re like a sponge!”

Yes. Use: When the rope falls from the rigging after Riff finishes shooting.

Allowed? NO! Foodstuffs will inevitably attract rodents and vermin.

Again, our goal is to provide a safe, enjoyable and authentic “Rocky Horror experience,” without damage to person, property, or the historic Paramount Theater. Your cooperation is greatly appreciated.