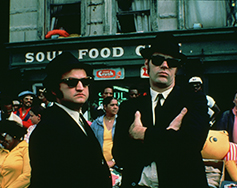 Paramount at the Movies Presents: The Blues Brothers [R]

In honor of our 90th anniversary, The Paramount Theater is presenting films from our nine decades of history. Next up, the show that really hits the road – The Blues Brothers!

Don your best sunglasses for this cult classic at The Paramount! Elwood (Dan Aykroyd) and Jake (John Belushi) reunite after Jake is released from prison and set out on a “mission from God” to save the orphanage in which the brothers grew up. The two “Blues Brothers” get their old band back together to raise the $5,000 needed to pay the orphanage’s back taxes, but their efforts are delayed by run-ins with the police, a menacing mystery woman, and rivaling bands. One of the most expensive comedies ever produced, The Blues Brothers – based on a beloved musical sketch on Saturday Night Live – features performances by John Candy, Carrie Fisher, Charles Napier, and Henry Gibson.