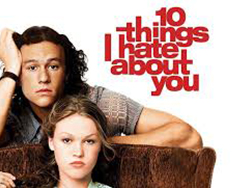 Paramount at the Movies Presents: 10 Things I Hate About You [PG-13]

In honor of our 90th anniversary, The Paramount Theater is presenting films from our nine decades of history. Next up, 10 Things I Hate About You!

Romeo, Oh Romeo, Get Out Of My Face.

Kat Stratford (Julia Stiles) is beautiful, smart, and quite abrasive to most of her fellow classmates, meaning that she doesn’t attract many boys. Unfortunately for her younger sister, Bianca (Larisa Oleynik), house rules say that she can’t date until Kat has a boyfriend, so strings are pulled to set the dour damsel up for a romance. Soon Kat crosses paths with handsome new arrival Patrick Verona (Heath Ledger). Will Kat let her guard down enough to fall for the effortlessly charming Patrick? Find out in this update of Shakespeare’s “The Taming of the Shrew,” set in high school.