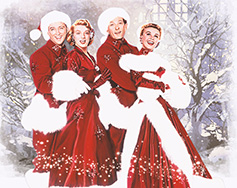 Two World War II buddies, Bob (Bing Crosby) and Phil (Danny Kaye), create a top song-and-dance routine that really wows the crowds. They cross paths with two beautiful sisters (Rosemary Clooney and Vera-Ellen) who also perform a song-and-dance act. Smitten with the sister act, Bob and Phil follow the duo to an inn in Vermont, which they find is owned by their former commanding officer (Dean Jagger). Realizing the inn is failing, the foursome perform a musical extravaganza to save the business.