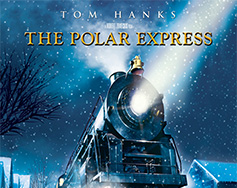 Paramount at the Movies Presents: The Polar Express [G]

“It doesn’t matter where the train is going. What matters is deciding to get on.” Late on Christmas Eve, after the town has gone to sleep, a boy boards the mysterious train that waits for him–The Polar Express. When the boy arrives at the North Pole, Santa Claus offers him any gift he desires. The boy asks only for a bell from the harness of Santa’s reindeer. But on the way home, the bell is lost. Christmas morning, the boy finds the bell under the Christmas tree, and when he shakes it, the bell makes the most beautiful sound he’s ever heard. His mother admires the bell, but she laments that it is broken … for, you see, only a true believer can hear the sound of the bell. Based on the classic Christmas story by Chris Van Allsburg.