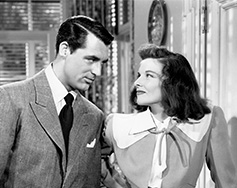 Paramount at the Movies Presents: The Philadelphia Story [NR]

In honor of our 90th anniversary, The Paramount Theater is presenting films from our nine decades of history. Next up, The Philadelphia Story!

Oh, the things they do among the playful rich! Cary Grant, Katherine Hepburn, and Jimmy Stewart star in the classic, multiple Academy Award-winning romantic comedy–The Philadelphia Story. On the eve of Tracy Samantha Lord’s (Hepburn) wedding, her blue-blood ex-husband, C.K. Dexter Haven (Grant), returns. C.K. discovered that a national tabloid plans to do an expose on Tracy’s philandering father and has agreed to smuggle a reporter (James Stewart) into her wedding if the magazine kills the story on the elder Lord. But C.K. never expects that the woman he still loves will suddenly fall for the undercover reporter. Now, before the evening is over, Tracy will be forced to take an unflinching look at herself and to realize which of these three men she truly loves. Based on a play by Philip Barry.