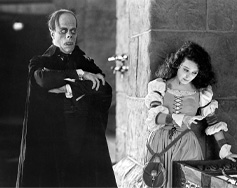 Paramount at the Movies Presents: The Phantom of the Opera [NR]

We’re celebrating Halloween by screening one of the original spooky movies, 1925’s The Phantom of the Opera!

This special presentation will also include a live film score performed by local organist Matt Marshall.

In this silent horror classic, aspiring young opera singer Christine Daaé (Mary Philbin) discovers that she has a mysterious admirer intent on helping her become a lead performer. This enigmatic masked presence is Erik, also known as the Phantom (Lon Chaney), a horribly disfigured recluse who lives underneath the Paris Opera House. When the Phantom takes Christine prisoner and demands her devotion and affection, her suitor, Vicomte Raoul de Chagny (Norman Kerry), sets out to rescue her.