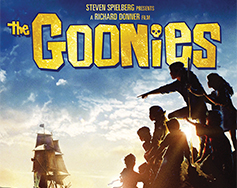 Paramount at the Movies Presents: The Goonies [PG]

They call themselves “The Goonies.” The secret caves. The old lighthouse. The lost map. The treacherous traps. The hidden treasure. And Sloth… Join the adventure!

From the imagination of Steven Spielberg, The Goonies plunges a band of small heroes into a swashbuckling surprise-around-every corner quest beyond their wildest dreams!

Following a mysterious treasure map into a spectacular underground realm of twisting passages, outrageous booby-traps, and a long-lost pirate ship full of golden doubloons, the kids race to stay one step ahead of a family of bumbling bad guys…and a mild mannered monster with a face only a mother could love.