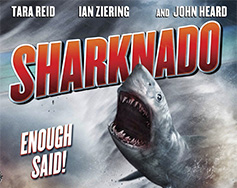 When a freak hurricane swamps Los Angeles, nature’s deadliest killer rules sea, land, and air as thousands of sharks terrorize the waterlogged populace. Who can stand in the way of the mighty Sharknado?