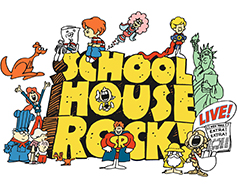 Academic subjects will never seem boring again when presented through mega-hits like “Conjunction Junction,” “Just a Bill,” “Interplanet Janet,” or “Three is a Magic Number!”

Schoolhouse Rock Live! explodes onto the stage updated for a whole new generation with imaginative image projections and a rock’n’roll feel. The live performance centers around Tom, a nervous young man on his first day of being a schoolteacher, who turns on the television to calm himself down and is visited by three aspects of his personality who remind him how learning can be fun.

Childsplay brings the classic Saturday morning cartoons to life with Schoolhouse Rock Live! Originally aired on the ABC television network from 1973-1985, then revived in the 90s and 00s, Schoolhouse Rock was a collection of clever, animated shorts that taught academic topics including grammar, mathematics, civics, and science.

“Director Anthony Runfola should be commended for this delightful production. It’s fast-moving, energetic, and, at an hour, the perfect length. Adults won’t check their watches and kids won’t grow restless in their seats. Quite simply, it’s pure fun.” — Randy Cordova, Critic, Arizona Republic

“Schoolhouse Rock Live! shows that learning can be fun with catchy songs that are memorable. Childsplay’s production is imaginative, with superb creative elements and an energetic cast.” — Gil Benbrook, Theatre Critic, talkinbroadway.com

Start a conversation before the show:

The original Schoolhouse Rock was a series of short musical cartoons on TV. What else do you know about it? How do you think it will be the same and different onstage?

Everybody learns differently. When you have to learn or memorize something (like spelling words or multiplication tables), what are the techniques that you use?

Start a conversation after the show:

What were 3 new facts that you learned today? How will you remember them?

By the end of the show, the teacher feels confident enough to go into the classroom. What helped him build his confidence? What are things you can do to help yourself or others feel more confident?

The director of Schoolhouse Rock Live! chose to add video to the show. How did the videos help to tell the story?

The songs in the play were written to help us learn new ideas and facts. What makes learning fun for you?