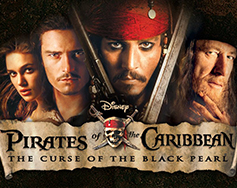 Paramount at the Movies Presents: Pirates of the Caribbean: The Curse of the Black Pearl [PG-13]

In honor of our 90th anniversary, The Paramount Theater is presenting films from our nine decades of history. Next up, Pirates of the Caribbean: The Curse of the Black Pearl! — Savvy?

Capt. Jack Sparrow (Johnny Depp) arrives at Port Royal in the Caribbean without a ship or crew. His timing is inopportune, however, because later that evening the town is besieged by a pirate ship. The pirates kidnap the governor’s daughter, Elizabeth (Keira Knightley), who’s in possession of a valuable coin that is linked to a curse that has transformed the pirates into the undead. A gallant blacksmith (Orlando Bloom) in love with Elizabeth allies with Sparrow in pursuit of the pirates.