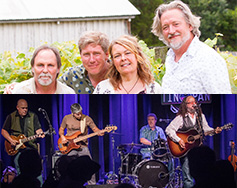 On June 26, 2021, The Paramount Theater will open her doors for the first Paramount Presents LIVE ON STAGE event since March 2020. The Jason Burke Band and Paulo Franco & The Freightliners kick off the summer, and the 15-month hiatus of Paramount Presents events, with this concert featuring two regional bands who are sure to get the house rockin’ with their bluesy, country, rock ‘n’ roll sound.

More About The Jason Burke Band:

More About Paulo Franco & The Freightliners:

Drawing their name from the legendary song by Townes Van Zandt, The Freightliners are Paulo Franco’s backing band. They are Jimmy Slagle – Lead Guitar and Vocals, Dave Hess – Drums and Vocals, and Doug Thompson – Bass. They bring intensity to each performance, utilizing blistering guitar solos and crisp vocal harmonies. They provide the accompaniment and groove to Paulo’s original music, bringing a fresh and unique interpretation to the songs you hear on the albums. The Freightliners are a band that find themselves at home as a country, rock, alt+country, or blues outfit. In addition to Paulo’s original music, The Freightliners bring a catalog of covers from artists that influence their sound including The Dead, The Stones, Townes Van Zandt, Uncle Tupelo, Blind Faith, and a whole bunch more.

In the last few years, Paulo Franco & The Freightliners have shared the stage with the likes of Los Lobos, Robert Earl Keen, Driving N Crying, Rhett Miller (Old 97s), Dan Baird of the Georgia Satellites, Walter Salas Humara (Silos), Chris Knight, Adam Carroll, Cris Jacobs, Cory Branan, Austin Lucas, and many others. In 2016, Franco released The Last Card, an album Paste Magazine hails as possibly the most sincere album of the year. No Depression’s Emily Hinde called The Last Card  “a phenomenal sophomore record.” She listed the record number two on her list of the best of 2016, which also included releases from The Avett Brothers, Sara Watkins, Drive-By Truckers, Sturgill Simpson, and more.