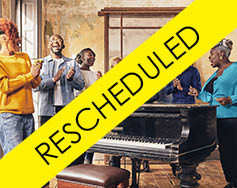 Due to the ongoing global health crisis, the April 25, 2021 show (originally scheduled for May 2, 2020) of The Kingdom Choir – Live On Stage! at The Paramount Theater in Charlottesville, VA has been rescheduled for April 30, 2022. All tickets for the original performance will be honored; patrons should hold on to their tickets. For ticket and refund inquiries, please contact The Paramount’s Box Office at 434.979.1333 or boxoffice@theparamout.net.

A global audience of over 2 billion people watched The Kingdom Choir perform Stand By Me at the Royal Wedding of Prince Harry and Meghan Markle!

Following their show-stopping performance of Stand By Me at the Royal Wedding in May of 2018, London’s The Kingdom Choir will bring their infectious joy and inspiration across the Atlantic for a major North American tour. Founded in 1994 by award-winning conductor Karen Gibson, the choir draws from various Christian traditions and is dedicated to creating a sound that reflects the community they share through their warm energy and enthusiastic performances. The Choir’s rendition of Stand By Me went straight to the top of the Billboard charts and last October they released their first full length album worldwide on Sony Music. Their success at the Royal Wedding has already seen them on several UK and American television appearances including ABC’s Good Morning America and CBS This Morning.

Karen Gibson, an award-winning choir conductor and workshop leader, is a powerhouse of inspiration and energy. Known for the high quality of her work, Karen’s experience is extensive. She has been involved with vocal groups and choirs for over 25 years, conducting gospel workshops across the UK and Europe as well as Nigeria, Japan, Zimbabwe, Rwanda and the USA. She has been instrumental in drawing together and conducting some of the most prestigious large-scale choirs for a variety of gospel and community initiatives. Karen has also run workshops for aspiring gospel conductors in the UK, Poland, Norway and Italy.

Karen currently works in schools across London teaching singing and training future leaders. Karen has recently founded her own community gospel choir, Gospel on The Rise, in the heart of Clapham Junction, London.