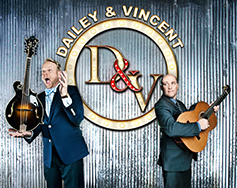 “Stand back or face the force of nature that is this astounding ensemble.” – Robert K. Oermann, Music Row Magazine

Hailing from world famous stages such as Carnegie Hall and the Ryman Auditorium, multi-Award Winners Dailey & Vincent will wow audiences as the duo is riding a wave of critical acclaim for their latest albums, Patriots & Poets and The Sounds of Christmas as well as their nationally broadcasted weekly TV series, The Dailey & Vincent Show, on RFD-TV. Dailey & Vincent’s sound is a concoction of traditional country, gospel and bluegrass blended together by the fantastically instinctive vocal blends of Dailey’s tenor and Vincent’s reedy harmonies.

Dubbed by CMT as “The Rock Stars of Bluegrass,” the Dailey & Vincent duo has been hailed throughout the music industry as one of the most exciting, reputable, and elite Bluegrass bands in America. For the last 4 years, Dailey & Vincent have brought their multi-award winning American Music (bluegrass, traditional country, and gospel music) to a national television audience on their top-rated, national, weekly television show, The Dailey & Vincent Show on RFD TV. Grand Ole Opry Members, five-time GRAMMY® award winners individually, three-time GRAMMY® award nominees collectively, four-time DOVE Award winners, and winners of 35 IBMA Awards altogether (including 3-time IBMA Entertainer of the Year Award winners and 3-Time Vocal Group of the Year Award winners), Dailey & Vincent’s reedy harmonies and world class musicianship has gained them well-deserved praise for their own distinctive style and worldwide recognition as American Music gold. Dailey & Vincent has garnered world-wide attention with their national, top-rated television series, The Dailey & Vincent Show, on RFD TV for 4 years running and over 1,000 airings of their PBS special Dailey & Vincent ALIVE – In Concert. Additionally, each of the last 6 CD releases have landed at the #1 spot on the Billboard charts including their first-ever Christmas album, “Dailey & Vincent: The Sounds of Christmas,” debuting at #1 on the Billboard Bluegrass chart and #8 on the Billboard Holiday Chart, landing right behind Michael Bublé and Pentatonix as the only country, bluegrass, and gospel act in the Top Ten.

Jamie Dailey – Jamie Dailey is a 4-time IBMA “Vocalist of the Year” award winner. Growing up performing with family and regional groups, Dailey later became the lead vocalist and guitarist for Doyle Lawson & Quicksilver for over 10 years. In addition to the amazing harmonies of Dailey & Vincent, Dailey’s voice can also be found on several recordings by Dolly Parton, Ricky Skaggs, and Russell Moore.

Darrin Vincent – Since beginning to perform at the age of two with his family band, The Sally Mountain Show, Vincent has accumulated 5 GRAMMY Awards and has been voted Bluegrass Bass Player of the Year 4 years in a row (2009-20012). As a former band member for over than 10 years to the GRAMMY Award-winning Ricky Skaggs and Kentucky Thunder, Vincent has credits with dozens of artists including his sister Rhonda Vincent (Queen of Bluegrass), Dolly Parton, Nora Jones, Emmylou Harris, Earl Scruggs, Bruce Hornsby, Vince Gill, John Hartford, and many more. It has been said that Darrin Vincent also has “the best laugh in the biz!”