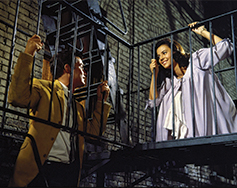 Paramount at the Movies Presents: West Side Story [G]

West Side Story (1961) was directed by Robert Wise and Jerome Robbins. The film is an adaptation of the 1957 Broadway musical of the same name, which in turn was inspired by William Shakespeare’s play Romeo and Juliet. Boasting music by the legendary Leonard Bernstein and lyrics by Stephen Sondheim, West Side Story stars Natalie Wood, Richard Beymer, Russ Tamblyn, Rita Moreno, and George Chakiris. Released on October 18, 1961 through United Artists, the film received high praise from critics and the public, and became the second highest grossing film of the year in the United States.

Winner of 10 Academy Awards (the record holder for the most wins for a movie musical).