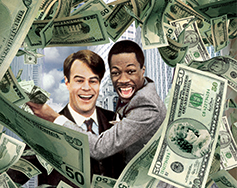 Some very funny business.
Upper-crust executive Louis Winthorpe III (Dan Aykroyd) and down-and-out hustler Billy Ray Valentine (Eddie Murphy) are the subjects of a bet by successful brokers Mortimer (Don Ameche) and Randolph Duke (Ralph Bellamy). An employee of the Dukes, Winthorpe is framed by the brothers for a crime he didn’t commit, with the siblings then installing the street-smart Valentine in his position. When Winthorpe and Valentine uncover the scheme, they set out to turn the tables on the Dukes.