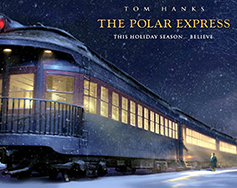 Paramount at the Movies Presents: The Polar Express [G]

“It doesn’t matter where the train is going. What matters is deciding to get on.”

The Polar Express is an animated Christmas movie based on the children’s book written by Chris Van Allsburg in 1985. The movie follows a young boy (Daryl Sabara) who embarks on a magical adventure to the North Pole aboard the Polar Express. On his quest, he not only learns about the spirit of Christmas but also the importance of friendship and bravery. The movie also stars the voices of Tom Hanks, Leslie Zemeckis, Eddie Deezen, and Nona Gaye.

The Polar Express, premiering on November 10, 2004, broke two records in the world of animation. First, the film had a budget of $165 million, a record-breaking number for animated movies at the time. In addition, it gained a listing in The Guinness Book of World Records (2006) as the first all-digital capture film.