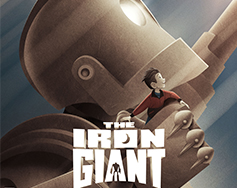 Paramount at the Movies Presents: The Iron Giant [PG]

Imagine you confront your enemy–a giant, scary robot from outer space–and he becomes your best pal.

A young boy befriends a monster in the heartwarming animated feature The Iron Giant. October 1957. Nine-year-old Hogarth Hughes (Eli Marienthal) lives in Rockwell, Maine, a seemingly idyllic town. Hearing stories of a UFO that crashed into the sea, Hogarth, always on the lookout for mutant aliens, finds a huge, metal-eating robot (Vin Diesel) with an insatiable curiosity and equally insatiable appetite. But the extraterrestrial’s presence unleashes a wave of Cold War paranoia that threatens to engulf Rockwell unless Hogarth and his 50-foot friend can stop it. Acclaimed animation director and writer Brad Bird brings his creative talents to the big screen in this unique tale of two heroes. In times like these, you really find out what your friends are made of … sometimes it’s metal if your best buddy’s The Iron Giant. Based on the book The Iron Man by Ted Hughes.