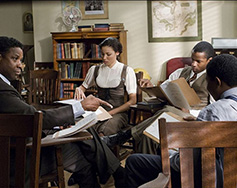 Paramount at the Movies Presents: The Great Debaters [PG-13]

When the nation was in need, he inspired them to give us hope.

Poet and professor Melvin B. Tolson (Denzel Washington) teaches at the predominately black Wiley College in 1935 Texas. He decides to start a debate team, something nearly unheard of at a black college. While at first he butts heads with the influential father (Forest Whitaker) of one of his best debaters, eventually he is able to form a team of strong-minded, intelligent young students, and they become the first black debate team to challenge Harvard’s prestigious debate champions.