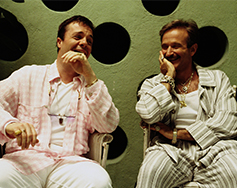 Paramount at the Movies Presents: The Birdcage [R] (25th Anniversary)

Come as you are.

In this hysterical comedy, Armand and Albert have built the perfect life for themselves tending to their gaudy Miami nightclub. But their pastel tranquility is shaken when Armand’s son announces that he’s getting married to the daughter of ultra-conservative Senator Keeley… and they’re all getting together for dinner! Can Armand and Albert transform themselves into Mr. and Mrs. Family Values in time? It’ll take the performance of their lives!