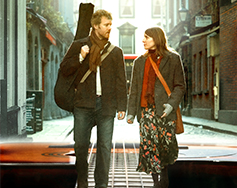 Paramount at the Movies Presents: Once [R]

How often do you find the right person?

A modern day musical set on the streets of Dublin. Featuring Glen Hansard and his Irish band “The Frames,” the film tells the story of a street musician and a Czech immigrant during an eventful week as they write, rehearse, and record songs that reveal their unique love story.