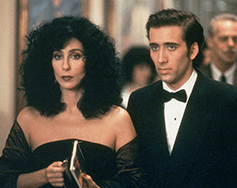 In her Academy Award-winning role, Cher, while waiting for her timid fiance to decide between her and his mother, falls in love with her fiance’s estranged brother (Nicolas Cage), a bakery worker with a love of opera and life. Supporting actress Olympia Dukakis and screenwriter John Patrick Shanley also won Oscars in this comedy classic.