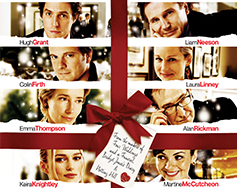 With a star-studded cast featuring Hugh Grant, Alan Rickman, Emma Thompson, Keira Knightly, and more, Richard Curtis’s Love Actually weaves the stories of eight couples together during the frantic month before Christmas. Love waxes and wanes; it changes and rearranges. These characters’ lives intertwine, and they’re all searching for the best Christmas gift of all – a little bit of love, actually.