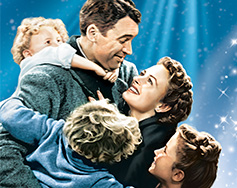 Paramount at the Movies Presents: It’s A Wonderful Life [PG]

Return to Bedford Falls and relive the magic and wonder of director Frank Capra’s heartwarming and enchanting holiday tale, It’s a Wonderful Life, as it plays on the Big Screen at The Paramount Theater this holiday season!

After George Bailey (James Stewart) wishes he had never been born, an angel (Henry Travers) is sent to earth to make George’s wish come true. George starts to realize how many lives he has changed and impacted, and how they would be different if he was never there.

Despite its initially poor performance due to high production costs and stiff competition, the Motion Picture Academy of Motion Picture Arts and Sciences saw fit to nominate It’s a Wonderful Life for five Oscars. With the considerable boost from over forty years of television screenings, the film has gone on to become one of the most inspirational and beloved movies in American cinema. It has since been recognized by the American Film Institute as one of the 100 best American Films ever made.