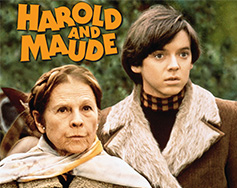 Paramount at the Movies Presents: Harold and Maude [PG]

A 50-year-old classic cult film that features one of the screen’s most unlikely pairs. It will defy everything you’ve ever seen or known about screen lovers. Bud Cort is Harold, a young man bored with wealth but interested in death. And Ruth Gordon is Maude, a wonderful old rascal who can see nothing but good intention in the world. Hal Ashby (Coming Home, Being There) directed from Colin Higgins’ (Four Play) first script. An outrageously funny and affecting film that proves love has no boundaries. Cat Stevens provides an uplifting musical score.