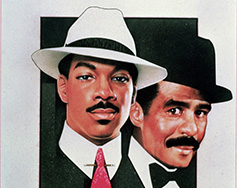 They’re up to something big

He’s quick with a quip, quick with a gun, and quick with a scheme to keep mobsters from muscling in on the 1930’s Harlem hot spot, Club Sugar Ray. Eddie Murphy stars as Quick in Harlem Nights, the stylish action-comedy produced, written, and directed by the multi-talented superstar.

Teaming with Murphy are Richard Pryor and Redd Foxx, a brilliant cast that puts three generations of comedy legends side by side. Della Reese, Arsenio Hall, Jasmine Guy, and Danny Aiello join them for the Murphy magic.

So what’s coming soon at Club Sugar Ray? With Murphy and Pryor as the masterminds, you can be sure it’s something big!