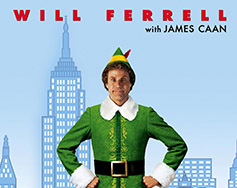 “This is one of those rare Christmas comedies that has a heart, a brain, and a wicked sense of humor, and it charms the socks right off the mantelpiece.” Robert Ebert