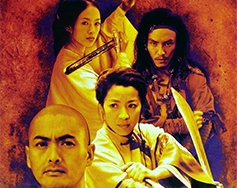 An epic set against the breathtaking landscapes of ancient China, Crouching Tiger, Hidden Dragon combines the exhilarating martial arts choreography by Yuen Wo-Ping (The Matrix) with the sensitivity and classical storytelling of an Ang Lee film. The result is something truly unexpected: romantic, emotionally powerful entertainment.