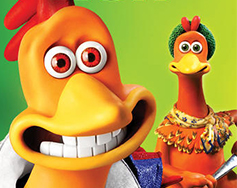 The creators of Wallace & Gromit bring you an exciting and original story about a group of chickens determined to fly the coop–even if they can’t fly! It’s hardly poultry in motion when Rocky (Mel Gibson) attempts to teach Ginger and her feathered friends to fly…but, with teamwork, determination, and a little bit o’ cluck, the fearless flock plots one last attempt in a spectacular bid for freedom.