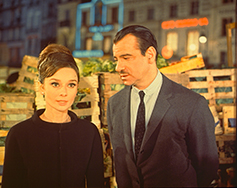 The first shot of Charade shows a pistol swinging ominously into a close-up – and Audrey Hepburn gets a squirt of water right in the eye. And so it goes: Charade is an elegant thriller that manages to spoof its genre while at the same time being uncommonly suspenseful. Cary Grant and Audrey Hepburn are the ideal leads for keeping their cool under preposterous twists in a deadly chase through Parisian environs; the supporting heavies include James Coburn, George Kennedy, and Walter Matthau; there are five corpses; the red-herrings are incalculable; the gowns are by Givenchy; the percussive score is by Henry Mancini, and the point of the whole thing is style and wit for their own sake, and what better sake is there? Charade, in its own way, is one of the most radical and experimental films of the ’60s.