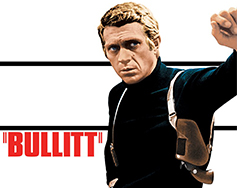 His new assignment seems routine: protecting a star witness for an important trial. But before the night is out, the witness lies dying and cool, and no-nonsense Detective Frank Bullitt (Steve McQueen) won’t rest until the shooters and the kingpin pulling their strings are nailed.

An Oscar winner for “Best Film Editing,” this razor-edged 1968 thriller features one of cinema history’s most memorable car chases. Buckle up and brace for unbeatable action.