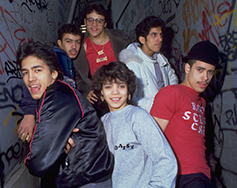 Get down, brother, shuffle those feet, shake a little boogie to the sound of that beat.

Guy Davis and Rae Dawn Chong are brash, bold, and breaking all the rules in this gritty musical about a talented rapper/DJ Kenny (Davis) who is inspired to use his talents to escape the urban ghetto after he meets a young, dedicated jazz artist (Chong).