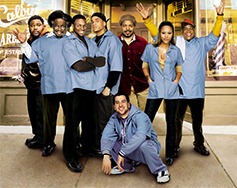 Barbershop is a smart comedy about a day in the life of a barbershop on the south side of Chicago, Calvin (Ice Cube), who inherited the struggling business from his deceased father, views the shop as nothing but a burden and waste of his time. After selling the shop to a local loan shark, Calvin slowly begins to see his father’s vision and legacy and struggles with the notion that he just sold it out.