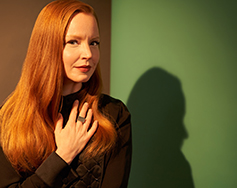 Victory Hall Opera Presents: Lauren Ambrose in No Daughter of Mine

A grandmother’s long-lost memoir, discovered in a garden shed, brought to life. A stunning story of courage, betrayal, and survival that spans the 20th Century.

Based on a confessional memoir discovered by accident in a garden shed, No Daughter of Mine is a sweeping yet intimate account spanning the 20th century. Extracts from the memoir are brought to life in this new script, enriched with songs that give context and transport the audience to another time and place. No Daughter of Mine is about the small joys, the big things we conceal, and the dreams we pass on to our children.

Lauren Ambrose (star of HBO’s Six Feet Under, M. Night Shyamalan’s Servant, feature films including Can’t Hardly Wait and In and Out, and My Fair Lady on Broadway) plays Eileen Robbins through many stages of her life, alongside Robbins’ own granddaughter, soprano Miriam Gordon-Stewart (Sydney Opera House, Deutsche Oper Berlin, Paris Châtelet) in this unforgettable two-woman show.

Do not miss these two stellar singer-actresses on stage together for the first time, in this story of courage and adventure!

Supported by a grant from the National Endowment for the Arts.