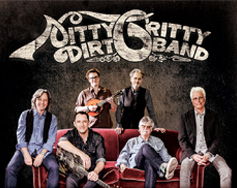 Lord, it was nearly sixty years ago.

Long Beach, California. Jeff Hanna was in high school, a holding zone where hormones and anxiety are left to fester until they explode like Langston Hughes’s dream deferred.

Suddenly, a sound burst through the middling morass at laser speed, deflating the balls of confusion that teenaged Jeff was holding. That sound came from the iron ore town of Hibbing, Minnesota, by way of Greenwich Village. It was Bob Dylan, a young man who at first recharged old folk and blues songs, but who became known for his own wild-eyed compositions.

And when Dylan came to play at the Wilson High School auditorium, Hanna paid $4 to sit in the balcony with his girlfriend and a group of pals that included Bruce Kunkel, with whom he would soon start the Nitty Gritty Dirt Band, a fluid combo that would make a beautiful and necessary mark on American music. Another key member of that band was a boy named Jimmie Fadden, who would sit and play Dylan songs with Hanna, transfixed by the way Dylan’s music blended seemingly every roots music strain.

They’ve won three Grammys, placed an album and a single in the Grammy Hall of Fame, and scored country hits including “Voila (An American Dream),” “Modern Day Romance,” “Stand a Little Rain,” and many more. They’ve undergone numerous lineup changes, the latest of which has just recorded its first studio album together. The album was produced by Ray Kennedy (Steve Earle, Lucinda Williams) and Hanna in a nondescript building located behind an auto parts store in Nashville’s Berry Hills neighborhood. In that studio, with vintage microphones and instruments and this newly reconstructed Nitty Gritty Dirt Band, the group added a definitive album to an unprecedented catalog.