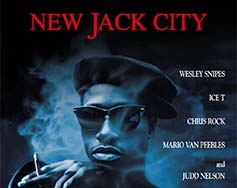 They’re a new breed of gangster. The new public enemy. The new family of crime.

Wesley Snipes stars in this hard-edged film based on a frightening true world as Nino Brown, an American success story–with a twist. He’s young, handsome, smart, rich, successful, and prominent in his community. But Nino Brown is a big-time drug baron. Determined to end the remorseless evil of Nino’s drug empire, two street-smart policemen will stop at nothing to destroy his organization.