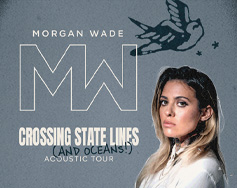 Morgan Wade didn’t write to be a sensation, for critical acclaim, or massive concert tours. She wrote to speak her truth, to save her own life – and perhaps throw a rope to others struggling with the weight of a world moving too fast, loves where you fall too hard, and nights that, good or bad, seem to go on forever.

2021 saw Reckless, her Thirty Tigers/now Sony Music Nashville debut, and lead single “Wilder  Days” topping critical lists from Rolling Stone, TIME, Stereogum, New York Times, Boston Globe,  FADER, Tennessean, Whiskey Riff, Billboard, and The Boot and Taste of Country who both proclaimed,  “a once-in-a-decade debut.” With a voice that is raw hurt, deep knowing, and somehow innocence retained, Wade wrote or co-wrote a song cycle about the reality facing teens and 20-somethings that embraced raw desire, the reality of getting high and getting sober, and the realm of crawling through the wreckage with a tough vulnerability that is as singular as the young woman from Floyd, Virginia.

With insider trade HITS proclaiming, “Imagine Kris Kristofferson as a Gen Z woman,” The New York Times raving, “she sounds like she’s singing from the depths of history,” and FADER offering, “Wade has a voice like a jagged blade, sharp enough to draw blood but lustrous under the light,” Reckless landed hard and true. A product of her collaboration with Sadler Vaden (guitarist in Jason Isbell + the 400 Unit) and engineer Paul Ebersold, the trio worked to keep the guitars forward, the edges rough, and her voice the star in the loose tumble of players meshing on the edge of Tom Petty/Lucinda Williams’ rock & roll.

After graduating from UT Austin (go Longhorns) Harper made her way to Nashville, TN. In her time there, she signed the publishing deal of her dreams with Jody Williams Songs (JWS), a co-venture with Warner Chappell Music. JWS is home to an incredible roster of artists, writers, and producers including Vince Gill, Natalie Hemby, Ashley McBryde, Nathan Chapman, Driver Williams, Trent Dabbs and more.

With her forthcoming debut project produced by Jake Gear (Hailey Whitters, Flatland Cavalry, Ben Chapman), Harper has cultivated a fresh take on Texas soul music. She nods to classic Memphis horns and Nashville songwriting while incorporating a modern indie flare and somehow maintaining those Texas roots. Look out for her debut album in spring 2023.

For questions regarding the VIP packages, please reach out to info@future-beat.com.

VIP merchandise will be distributed at the show.