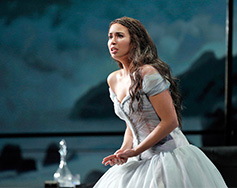 Soprano Nadine Sierra takes on one of the repertory’s most formidable and storied roles, the haunted heroine of Donizetti’s Lucia di Lammermoor, in an electrifying new staging by Australian theater and film director Simon Stone, conducted by Riccardo Frizza. Tenor Javier Camarena adds to the bel canto fireworks as Lucia’s beloved, Edgardo, with baritone Artur Ruciński as her overbearing brother, Enrico, and bass Matthew Rose as her tutor, Raimondo.

Production a gift of the Trust of Michael Tapper, and the Rosalie J. Coe Weir Endowment Fund