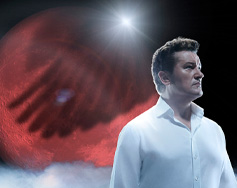 Wagner’s soaring masterpiece makes its triumphant return to the Met stage after 17 years. In a sequel to his revelatory production of Parsifal, director François Girard unveils an atmospheric staging that once again weds his striking visual style and keen dramatic insight to Wagner’s breathtaking music, with Music Director Yannick Nézet-Séguin on the podium to conduct a supreme cast led by tenor Piotr Beczała in the title role of the mysterious swan knight. Soprano Tamara Wilson is the virtuous duchess Elsa, falsely accused of murder, going head-to-head with soprano Christine Goerke as the cunning sorceress Ortrud, who seeks to lay her low. Bass-baritone Evgeny Nikitin is Ortrud’s power-hungry husband, Telramund, and bass Günther Groissböck is King Heinrich. This live cinema transmission is part of the Met’s award-winning Live in HD series, bringing opera to movie theaters across the globe.