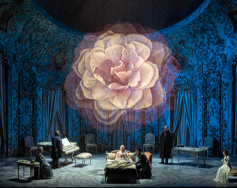 Soprano Nadine Sierra stars as the self-sacrificing courtesan Violetta—one of opera’s ultimate heroines—in Michael Mayer’s vibrant production of Verdi’s beloved tragedy. Tenor Stephen Costello is her self-centered lover Alfredo, alongside baritone Luca Salsi as his disapproving father, and Maestro Daniele Callegari on the podium. This live cinema transmission is part of the Met’s award-winning Live in HD series, bringing opera to movie theaters across the globe.