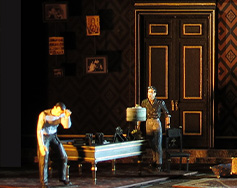 *New Production – Live Performance Broadcast
Pre-Met Lecturer: Dr. Leanne Clement
Dr. Clement is the General Director of Charlottesville Opera. Previously, she was General Director of Opera Louisiane in Baton Rouge, LA, and is a mezzo-soprano specializing in the works of Verdi and Wagner.

Umberto Giordano’s exhilarating drama returns to the Met repertory for the first time in 25 years. Packed with memorable melodies, showstopping arias, and explosive confrontations, Fedora requires a cast of thrilling voices to take flight, and the Met’s new production promises to deliver. Soprano Sonya Yoncheva, one of today’s most riveting artists, sings the title role of the 19th-century Russian princess who falls in love with her fiancé’s murderer, Count Loris, sung by star tenor Piotr Beczała. Soprano Rosa Feola is the Countess Olga, Fedora’s confidant, and baritone Artur Ruciński is the diplomat De Siriex, with much-loved Met maestro Marco Armiliato conducting. Director David McVicar delivers a detailed and dramatic staging based around an ingenious fixed set that, like a Russian nesting doll, unfolds to reveal the opera’s three distinctive settings—a palace in St. Petersburg, a fashionable Parisian salon, and a picturesque villa in the Swiss Alps. This live cinema transmission is part of the Met’s award-winning Live in HD series, bringing opera to movie theaters across the globe.