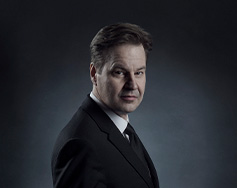 Tony Award–winning director of Broadway’s A View from the Bridge and West Side Story, Ivo van Hove makes a major Met debut with a new take on Mozart’s tragicomedy, re-setting the familiar tale of deceit and damnation in an abstract architectural landscape and shining a light into the dark corners of the story and its characters. Maestro Nathalie Stutzmann makes her Met debut conducting a star-studded cast led by baritone Peter Mattei as a magnetic Don Giovanni, alongside the Leporello of bass-baritone Adam Plachetka. Sopranos Federica Lombardi, Ana María Martínez, and Ying Fang make a superlative trio as Giovanni’s conquests—Donna Anna, Donna Elvira, and Zerlina—and tenor Ben Bliss is Don Ottavio. This live cinema transmission is part of the Met’s award-winning Live in HD series, bringing opera to movie theaters across the globe.