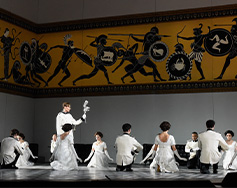 *Revival – Live Performance Broadcast
Pre-Met Lecturer: Mary Ann Archer
A flutist, formerly with the Metropolitan Opera Orchestra for 26 years, Mary Ann is now also a spiritual director and author of “Shared Imagination,” a book on meditation, and “Zeesha’s Tale,” an illustrated children’s book on three donkeys in the Bible.