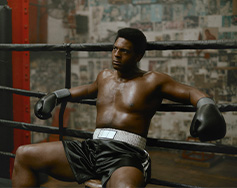 Six-time Grammy Award-winning composer Terence Blanchard brings his first opera to the Met after his Fire Shut Up in My Bones triumphantly premiered with the company to universal acclaim in 2021–22. Bass-baritone Ryan Speedo Green is the young boxer Emile Griffith, who rises from obscurity to become a world champion, and bass-baritone Eric Owens portrays Griffith’s older self, haunted by the ghosts of his past. Soprano Latonia Moore is Emelda Griffith, the boxer’s estranged mother, and mezzo-soprano Stephanie Blythe is the bar owner Kathy Hagan. Yannick Nézet-Séguin takes the podium for Blanchard’s second Met premiere, also reuniting the director-and-choreographer team of James Robinson and Camille A. Brown. This live cinema transmission is part of the Met’s award-winning Live in HD series, bringing opera to movie theaters across the globe.