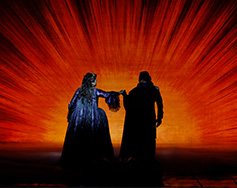 The exhilarating soprano Lise Davidsen makes her Live in HD debut in one of her signature roles, the mythological Greek heroine of Strauss’s enchanting masterpiece. The outstanding cast also features mezzo-soprano Isabel Leonard as the Composer of the opera-within-an-opera around which the plot revolves, with soprano Brenda Rae as the spirited Zerbinetta and tenor Brandon Jovanovich as Ariadne’s lover, the god Bacchus. Marek Janowski conducts.

Please join us for a complimentary pre-opera lecture in The Paramount Theater Auditorium at 12:00PM. The lecture for Ariadne auf Naxos will be conducted by Mary Ann Archer, flutist, formerly with the Metropolitan Opera Orchestra for 26 years. Now also a spiritual director and author of “Shared Imagination,” a book on meditation, and “Zeesha’s Tale,” an illustrated children’s book on three donkeys in the Bible.