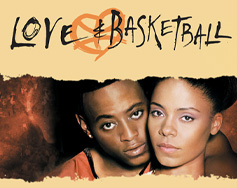 Monica (Sanaa Lathan) and Quincy (Omar Epps) are two childhood friends who both aspire to be professional basketball players. Quincy, whose father, Zeke (Dennis Haysbert), plays for the Los Angeles Clippers, is a natural talent and a born leader. Monica is ferociously competitive but sometimes becomes overly emotional on the court. Over the years, the two begin to fall for each other, but their separate paths to basketball stardom threaten to pull them apart.