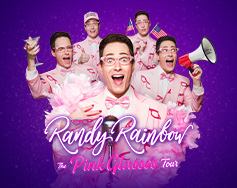 Not Yet A Paramount Member? CLICK HERE to Become One Today.

Wearing a mask while inside the Theater for this event is optional.

His memoir, Playing with Myself, has received rave reviews and landed him on the New York Times Best Sellers list. The Los Angeles Times accurately points out that in his book, Rainbow “vividly recollects the alienation so many LGBTQ+ youth experiences.” Musical theater was an escape for Rainbow that helped catapult his career. His musical parodies and political spoofs have garnered him worldwide acclaim and three EMMY® nominations for Outstanding Short Form Variety Series. Rainbow (yes, that’s his real name) enjoys a star-studded fan base that regularly retweets and shares his work.

American author and media pundit Dan Savage called him “the best thing to come from the GOP race.” In a recent article, Forbes pondered, “Why Randy Rainbow, The Muppets, and The Avengers Should Host the Oscars.” As The Washington Post noted, Randy Rainbow has found his spotlight through the Internet, emerging as a viral sensation who dispenses musical-comedy salve for a divided nation.